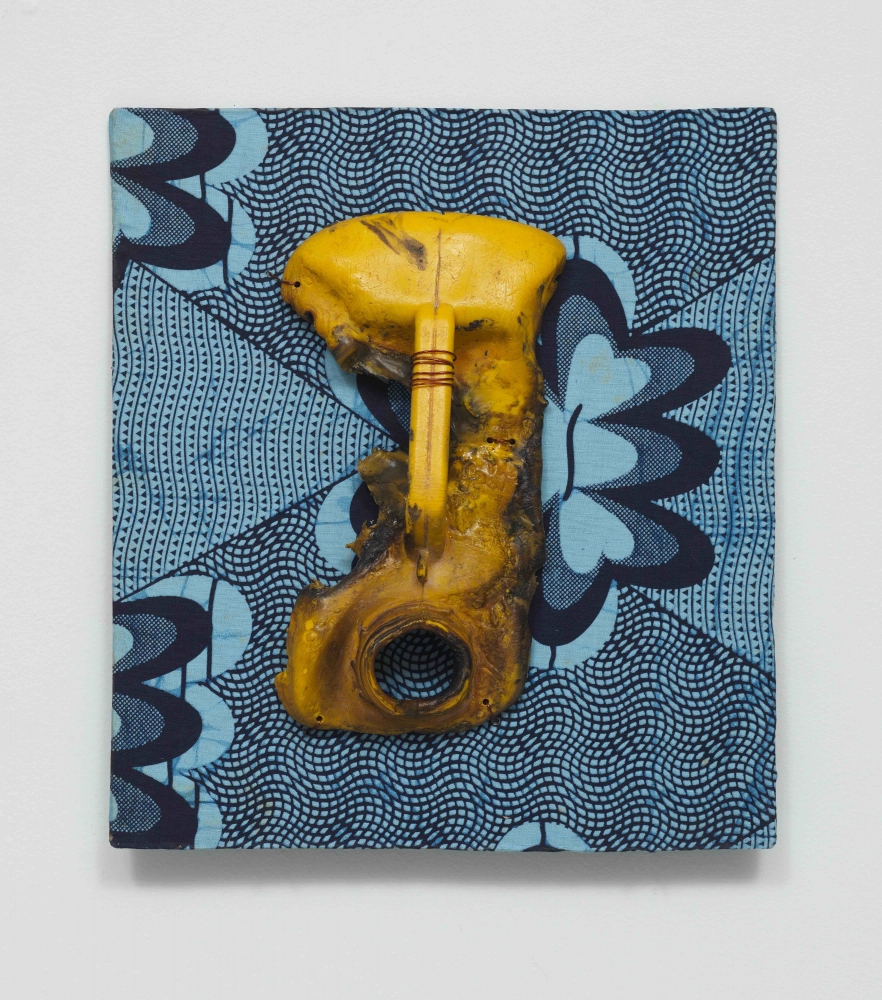 Essay by Neville Wakefield
Scarcity, while not the mother of invention, may yet be a close cousin. Without it we wouldn’t have Picasso’s Blue Period or Serge Attukwei Clottey’s yellow. A legacy water crisis endured in Ghana in the early 2000’s under president John Kufuor; the crippling shortage of humanity’s most basic need left the country awash in a sea of discarded yellow water containers. Known locally as “Kufuor gallons,” these predominantly yellow containers became the staple of an ongoing body of work that combines collage and assemblage along with environmental and social practice. The process results in what he refers to as “paint-less paintings” – large plastic tapestries that incorporate other salvaged waste items, such as discarded electrical goods and wood, bones, and shells gathered from the coastal neighborhood where he lives and works in the capital, Accra.

“Ghana is one of the driest countries and faces some of the most detrimental consequences from climate change and water shortages. Yet the government does nothing, so I have taken it upon myself to educate through art,” Clottey says. “Afrogallonism,” as Clottey’s practice has become known, is a comment both on consumption within modern Africa and a process by which clean-up takes place through the sourcing of plastic material from the beaches and streets around him. Through cutting, drilling, stitching, and melting found materials, Clottey’s sculptural installations act as a means of inquiry into form and history. Quilted together into vast walls of fragmented parts, the resulting tapestries are often installed as barriers that prevent access or vision. Here, the dialogue between container and contained is enacted not just within the object itself but the space it inhabits expanding from the local to the global, from the space of art to that of awareness, from a colonial past to a globalized future.

Described by Clottey as 'an artistic concept to explore the relationship between the prevalence of the yellow oil gallons in regards to consumption and necessity in the life of the modern African,', each of the works that come out of ‘Affrogallonism’ is a trace not just of the passage of materials but also of the actions of other upon them. The yellow plastic containers, originally produced to transport oil, were, despite their toxicity, re-purposed during the water shortage to transport the more precious commodity. Presaging a larger global crisis whereby water will become the new black gold, each container carries within it the personal, family, and collective histories of trade and migration. Their journey begins across continents before landing in Accra, where in a performative act they are cut up and the stories of the passage through different hands are woven back together into objects of another kind of consideration.  For Clottey, the passage of these objects from the West into trash and their re-circulation as cultural capital is key to a practice that finds within poverty and scarcity a potential for social wealth.

In Clottey’s work, singular thought gives way to ecologies of ideas. Formed as they are around subjects as diverse as gender roles within Ghanan society, trade routes, plastic waste, and a practice that includes installation, performance, photography and sculpture. When he first took to the streets wearing his mother’s clothes, his performance sparked ongoing debate around gender equality and the question of LGBTQ rights. As the founder of Ghana’s GoLokal performance collective, Clottey sees art as a way to transform society. With aspects of activism prevalent in his practice, his works challenge convention and advocate the importance of creativity as both political and social act.